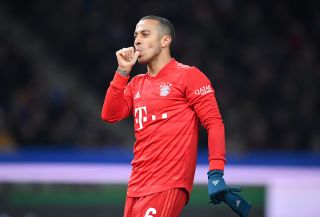 Thiago, 29, has been with Bayern Munich since 2013 after he moved from Barcelona in a transfer which cost £22.5, as per TransferMarkt.

The world-class midfielder played a pivotal role in his side’s recent Champions League win last season and has become best known for his ability to dictate games.

Thiago is well up there among the world’s best midfielders as he consistently displays some superb technical attributes which see him operate as an extremely effective deep laying play-maker.

The 29-year-old is reportedly a summer transfer target for rivals Manchester United and Liverpool, according to leading journalist Fabrizio Romano.

However, in light of the intensifying speculation surrounding the Spaniard’s future, after his side’s 1-1 draw against Germany last night, as quoted by Metro, Thiago said: “I only think about the game against Ukraine. Afterwards, we will see.

“Bayern is my home and I am happy to be there.”

The talented midfielder was then asked who he would choose between Liverpool and United to which he replied with “Ciao” before walking away.

Despite Thiago publicly declaring his love for Bayern Munich, the 29-year-old is still expected to depart this summer with speculation only set to intensify further.

However, with Liverpool reportedly on the verge of selling midfielder Gini Wijnaldum to Barcelona, as per Sky Sports, should the Dutchman’s sale materialise, funds required to lure Thiago to Anfield could then be available for Jurgen Klopp to complete the transfer.