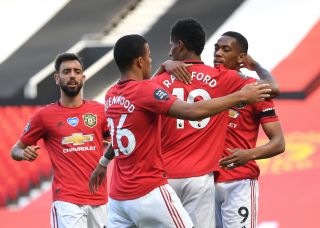 The Premier League’s PFA Men’s Young Player of the Year nominees have been announced which features Manchester United’s Marcus Rashford and Mason Greenwood.

The prestigious award sees a host of the Premier League’s youngest and most exciting talent go head-to-head for the right to claim the well-respected award.

Both Rashford and Greenwood find themselves included in the award’s six-man nomination list after both attackers enjoyed a fine campaign last season.

Rashford, 22 and Greenwood, 18 combined wonderfully last season across the United front-line and managed to rack up a superb 56 goal contributions in 94 appearances in all competitions.

The award boasts a long-line of previous winners who have gone onto enjoy successful careers as more established senior players with some past winners including the likes of Man City’s Raheem Sterling (2018-19), Spurs’ Harry Kane (2014-15), Spurs’ Gareth Bale (2012-13) and United’s Cristiano Ronaldo (2006-07).

This year’s nominees have been announced with the full list below: