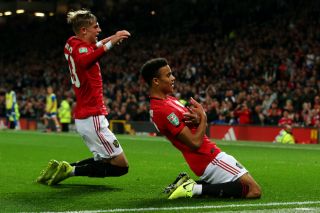 Manchester United have officially announced on their official website ManUtd.com that the club have awarded youngsters Mason Greenwood and Brandon Williams with new shirt numbers ahead of next season.

Greenwood, 18 and Williams, 20 have both enjoyed thoroughly impressive break-through campaigns last season with Greenwood especially being arguably one of the Premier League’s most exciting prospects since the days of a young Wayne Rooney.

The exciting English attacker rose to the forefront of European top-flight football after being directly involved in a stunning 23 goals in all competitions last time out.

Elsewhere, Williams has become one of the league’s most exciting wing-backs after showing impressive versatility to operate on either flank. The youngster managed to rack up 37 senior appearances in all competitions last season.

In light of both players superb campaigns, United have decided to upgrade their standing within the first-team by issuing the youngsters with new shirt numbers ahead of the 2020-21 season.

Williams who previously wore the number 53 will take on the number 33 shirt next season and Greenwood who was wearing the number 26 will instead wear the number 11 shirt.