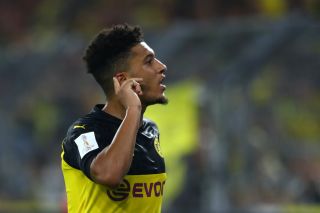 Manchester United are reportedly in the process of finalising agent fees and the player’s salary terms before launching an official bid for Borussia Dortmund’s Jadon Sancho.

Sancho, 20, has been the transfer-saga of the summer after United have been relentlessly linked with the talented Englishman but the proposed deal has yet to materialise.

The young attacker has enjoyed a stunning rise to top-flight European football and has quickly become one of the sport’s hottest prospects after a highly-impressive break-through campaign with German club Borussia Dortmund last season.

Sancho played a key role in Dortmund’s season last year after being directly involved in 40 goals in 44 games in all competitions.

According to The Times, the 20-year-old will cost the Reds upwards of an eye-watering £100m and despite much speculation surrounding his future, it now appears that the United hierarchy could finally be ready to stump up the cash.

It has been reported by the Daily Mail that the Reds are currently finalising the player’s salary terms as well as his agent’s fees before they submit an official transfer offer for Sancho who is valued at £108m by the Black and Yellows.

Should United manage to secure the £108m signing of Sancho, the 20-year-old would become the world’s third most expensive football player and sit only behind PSG duo Neymar Jnr and Kylian Mbappe and narrowly behind Atletico Madrid’s Joao Felix.

The report comes in light of Bleacher Report’s claims that United officials had grown frustrated with how much information regarding Sancho has been leaked to the public which has resulted in both clubs agreeing to negotiating in a more ‘respectful manner’.

With just a little over four weeks remaining in this summer’s transfer window, United fans can remain hopeful that a deal between Dortmund and United can be struck for arguably one of the world’s most exciting talents.