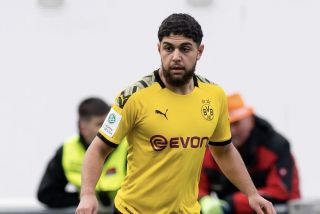 Manchester United have reportedly offered a trial to ex-Borussia Dortmund winger Reda Khadra who is currently available on a free transfer.

Khadra, 19, has been given a trial by Reds manager Ole Gunnar Solskjaer who is keen to take a look at the winger after he left former club Borussia Dortmund earlier this summer.

According to Daily Mail Solskjaer and his staff are preparing to take a closer look at the 19-year-old who featured in 69 youth team matches for Dortmund.

The winger managed to rack up 11 assists and two goals in all competitions for Dortmund’s youth side with one of his finest moments coming against Derby County in the UEFA Youth League earlier this year.

Khadra who previously trained with Stoke City has recently joined up with the United youth side but narrowly missed the deadline to be allowed to feature in the Red’s recent match against Doncaster at the Keepmoat Stadium.

The young Reds have no more friendlies lined-up until the beginning of the season when their first game will be against Salford City in the EFL Trophy next Tuesday.