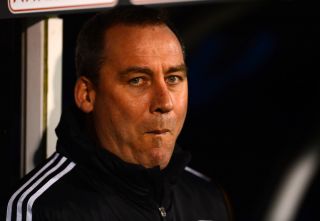 Former coach Rene Meulensteen believes Manchester United might be just one signing away from challenging for the Premier League title next season.

United announced versatile midfielder Donny van de Beek as their first summer signing on Wednesday but there are still plenty of other areas that need addressing before Ole Gunnar Solskjaer’s rebuild is complete.

The Reds finished 33-points behind champions Liverpool last season and have witnessed Chelsea invest significantly on their squad this summer.

Meulensteen, who was Sir Alex Ferguson’s assistant at Old Trafford between 2007 and 2013, acknowledges the chasm between United and title challengers Liverpool and Manchester City last year.

But he believes the club may just be one elite striker away from competing domestically again.

“Obviously, there was a big, big gap there last year,” Meulensteen told talkSPORT.

“And I think the gap started sort of in the early part of the season.

“What is vitally important is that United are going to have a really good start to the season so they don’t lose any ground, they are in there and they keep competing because that will grow the belief.

“I think we are maybe another good signing away; I keep saying they should bring in a really top, top striker.

“I think, for instance, if you were able to get Kane – I don’t think they would be able to get him – I would say yes, they will compete for the title next year.”

Meulensteen has again reiterated his belief that United need require a world-class striker and Tottenham forward Harry Kane is as proficient in front of goal as they come.

But Anthony Martial had his best goalscoring season for the Reds in 2019/20, netting 23 goals in all competitions despite missing eight weeks of the season through injury.

It would be unfair to replace Martial given he has shown genuine signs of brilliance in his favoured number nine role and Solskjaer should focus on improving the squad around him.

An elite wide-forward such as Jadon Sancho, plus an experienced world-class central defender would make United a much more imposing force next season.