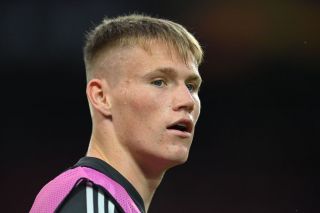 Darren Fletcher is convinced Scott McTominay has a fright future ahead of him with Manchester United and Scotland, in terms of playing a major role for his club and country (Scotland won’t be winning the World Cup anytime soon).

The 23-year-old has a good season last term and was arguably United’s most influential player before Christmas. An injury rattled him a bit and he found it difficult to get back into the team with Nemanja Matic performing impeccably and earning a new contract.

Furthermore, McTominay started just four of United’s final 14 games so next season he will be aiming to get more appearances under his belt. Nobody is saying it will be easy after the arrival of Donny van de Beek.

On the international front, McTominay hasn’t been picked consistently by Steve Clark and he should be expected to make a bigger impact on that stage very soon.

Fletcher, who played for both Scotland and Manchester United, has faith in McTominay.

“I think he’s had a fantastic season. He didn’t feature as much post-lockdown, but I think that was more to the form of other players rather than his.

“He was arguably one of United’s best players beginning of the season and when the team was struggling he was pulled in some big performances.

“I think sometimes it happens like that, really. Circumstances dictate that sometimes the person that’s got your jersey is just in such good form or the team’s in good form that you just can’t get in.

“It’s nothing that you should take personally and you just have to bide your time and wait for your opportunity because there does come a time where you’re in the team and you’ve got the name on the jersey and somebody else is on the outside looking in. That’s the way it is at a big club.

“I’m sure Ole and the people at the club are telling Scott how important he is and I’m sure his level will be determined to get back into the team.

“I think he’s got a massive future ahead for Manchester United. I think he can become whatever you want him to be in midfield. I really do. He could be a destroyer, he could be box-to-box, he’s got goals in his game. He could potentially even do a job at centre-back as he gets more experience.

“I think he’s going to be invaluable for United going forward and Scotland obviously.”