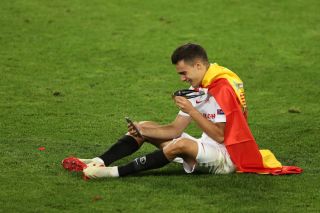 The 23-year-old spent last season on loan at Sevilla — starting in their Europa League semi-final win over United — and the report states that he has been tracked by the club’s recruitment department, which is headed by chief technical scout Mick Court.

Reguilon assisted Sevilla’s equaliser against United in their 2-1 win and was called up to the Spain squad by coach Luis Enrique.

Contracted to Real Madrid until 2023, he still finds himself behind Marcelo and Ferland Mendy in the left-back pecking order. And he knows that won’t be the case elsewhere.

He is represented by Kia Joorabchian who United have not dealt directly with since the fallout over Carlos Tevez’s departure in 2009. They could be understandably reluctant to deal with him again — but that’s unknown if though they hardly flinched when Joorabchian would have wanted to take Philippe Coutinho to Old Trafford.

The MEN add that United decided in November not to move for Reguilon due to the emergence of Brandon Williams.

Although we haven’t heard anything on the future of Diogo Dalot, I would still be very surprised if he stayed at the club beyond this summer because Ole Gunnar Solskjaer doesn’t appear to be a fan of the Portuguese full-back.

If he leaves we’ll need another full-back and Reguilon would push Luke Shaw down the pecking order, despite the Englishman being one of our top performers last term.