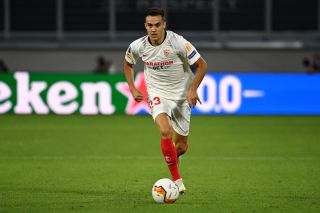 Reguilon spent last season on loan at Sevilla where he played a key role in the La Liga side achieving yet another Europa League triumph.

The Spaniard provided the assist for Sevilla’s equaliser against United during the semi-finals and his performance attracted praise from plenty of supporters as the Reds crashed out.

Manchester Evening News reported on Thursday that United are monitoring Reguilon amid uncertainty over his future with the 23-year-old behind Marcelo and Ferland Mendy in Zinedine Zidane’s Madrid pecking order.

And Spanish publication Sport now claim that United have tabled a €30m offer for the youngster who is no longer in Zidane’s plans at the Bernabeu.

Sport claim Madrid will make a decision over whether they should loan out Reguilon or sell him permanently early next week.

PSG, Juventus, Napoli and Tottenham Hotspur are all credited with an interest in the defender who could prove to be one of the bargains of the summer given his pedigree and potential.

United’s interest in Reguilon is now being widely reported but it is unclear where Ole Gunnar Solskjaer would see him in his squad at Old Trafford.

While a left-back should not be the priority, Reguilon could be an astute signing and would provide extra competition for Luke Shaw ahead of the new season.