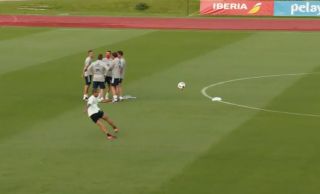 Thiago Alcantara is a name that has popped up in quite a few Manchester United gossip columns in the past week.

While Liverpool look to be most serious about making a move for the Bayern Munich treble-winner, Manchester United are said to be interested (via Daily Mail) in signing the midfielder after failing to do so in 2013 when he left Barcelona for the Bundesliga giants.

Thiago probably wants a new challenge in his career and after winning the Champions League this year, I’m surprised someone hasn’t snapped him up already.

There is no denying Thiago is a world-class player and he’d add something extra to every Premier League team’s midfield.

He has shown some great passing techniques as well as an incredible first touch in a recent video from Spain training, shared on Twitter:

The Bayern Munich star can be seen pairing up with Manchester United’s Rodri while on international duty.

I think it’s worth following the story on Thiago’s future. He may be most likely to sign for Liverpool but they seem to be struggling to put together deals.

It would great to see us take advantage of that and quickly conduct a deal with Bayern for Thiago.

But after signing Donny van de Beek I can’t see it happening.

I’m sure Bayern wouldn’t be against keeping him beyond the summer.

Read more: Dean Henderson up for challenge with David de Gea for Manchester United No.1