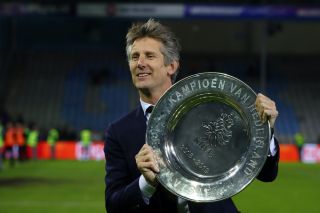 Van de Beek will add more creativity to United’s midfield alongside Bruno Fernandes and Paul Pogba. He should make his Premier League debut against Crystal Palace on September 19.

Manager Ole Gunnar Solskjaer says he’s got “all the technical attributes needed to perform in this team and has the personality required to succeed at Manchester United,” (via ManUtd.com) which bodes well for the squad he is trying to build in order to make the Reds a successful team again.

The truth is United don’t have enough options from the bench, even in the positions we are considered strongest in, if they truly want to challenge for titles. Adding players like Van de Beek to the fold can only help the cause.

While the club receives criticism for how they conduct transfers, usually taking forever to get a deal over the line, this one was finalised quickly thanks to the excellent relationship that exists between United and Ajax.

Ajax CEO Edwin van der Sar, also renowned as a Manchester United legend, posted a tweet after the transfer was finalised asking the Reds to take care of their new signing…

Van der Sar has also written a classy open letter to United fans, as seen below via @ManUtdStuff.

“Dear Manchester United fans, I hope you’re doing well,” the letter begins.“It seems our paths have crossed again. One of ours is joining you this season. And like so many players before him, he’s been with us since he was just a little boy.

“Shortly after his debut, he became one of our best. Especially the last couple of years were amazing. From the Europa League final (no hard feelings) to our Champions League run and winning the Dutch championship.

“The team he was part of showed the world who we are and what Ajax stand for.

“Like you, we pride ourselves on being one of the best at developing talent and giving young players a shot at the highest level. You could say your new star is the embodiment of that pride.

“That’s one of the many reasons we don’t like to see him leave, but we understand it’s time for him to move on. To dream on.

“And where better to do so than in your theatre. Trust me, i know.

“Please take good care of Donny, and help him dream.

In his first interview with ManUtd.com, Van de Beek admitted Van der Sar had a big influence on his decision to join United.

“I talked with him and he told me a lot of stories about the club and about everything. He told how big the club is and how nice an experience he had with it.”

Read more: Opinion: How Man United would look if three other targets secured