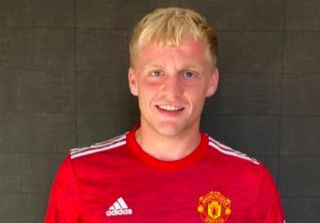 Donny van de Beek has confirmed he had an agreement in place to sign for Real Madrid before eventually completing his move to Manchester United.

Van de Beek was announced as United’s first summer signing on Wednesday and will wear the n0.34 shirt as a tribute to former Ajax teammate and close friend Abdelhak Nouri.

As per BBC Sport, United have signed van de Beek on a five-year-deal after agreeing an initial fee of £35m for the Dutch international’s services.

This seems an incredibly astute piece of business for United which has been rare in the post Sir Alex Ferguson era.

But Van de Beek was actually very close to completing a switch to the Bernabeu and the transfer collapse initially frustrated the 23-year-old.

“You do not want to know how relieved I am that I have my transfer,” he told Dutch newspaper De Telegraaf.

“As you know I was around with Real Madrid and the clubs also had an agreement, but for some reason it did not go through.

“Players who were going to leave, stayed and Madrid dropped out. Of course, you are annoyed at the beginning and you wonder if such a possibility will arise again.

“Manchester United is a dream, of course a great club, in the strongest league in the world. I didn’t have to think for a second when I got this chance.”

The Athletic reported before United confirmed the signing that Real Madrid had all but agreed a £50m deal for Van de Beek in 2019 subject to Los Blancos selling some of their surplus players.

After the deal didn’t materialise, Van de Beek then agreed to join Madrid this summer instead before the La Liga giants pulled out due to an unwillingness to do any major business due to the economic impact of the coronavirus pandemic.

Madrid’s loss has been United’s gain and they have signed a versatile, promising talent with European pedigree at a very reasonable price.