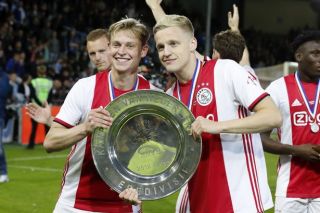 The Barcelona midfielder played with Van de Beek during his time at Ajax. Together they played in the team that reached the Champions League semi-finals before being eliminated by Mauricio Pochettino’s Tottenham Hotspur.

“I spoke to Donny [Van de Beek] about his transfer,” De Jong said (via The Metro). “This is a beautiful transfer and we are all very happy for him.

“Did he ask me for advice? No, no, he can think by himself.”

Barcelona find themselves in a real sorry state at the moment and the future of Lionel Messi has never been in such doubt. De Jong is one of the best young players Barca have to offer, so the future could be very much in the midfielder’s hands.

It will be interesting to see what happens the current crop of players at Barcelona if Messi actually leaves Camp Nou this summer.

The news that he wants out if not only a blow to Barcelona but Spanish football. Not long ago they lost Cristiano Ronaldo to Serie A giants Juventus.

Hopefully it will be a happy story for Van de Beek when he arrives at Old Trafford — rather than years of torment like De Jong probably has ahead of him if he stays at Barcelona.