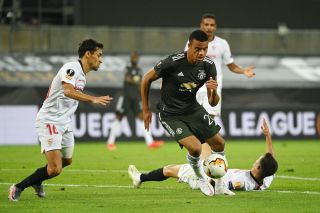 Mason Greenwood has heaped praise on Ole Gunnar Solskjaer for helping his development during his breakthrough season in Manchester United’s first team.

The 18-year-old quickly established himself as one of the great attacking talents in world football. Greenwood did that by scoring 18 goals in all competitions, 10 of which were in the Premier League, with the majority of his game time coming on the right wing.

Now he is seen as one of the most lethal finishers the Premier League has to offer. At the age of 18 that’s incredible.

Eventually Greenwood is likely to become a centre-forward. Gareth Southgate spotted his talents last season (who didn’t?) and gave him his first call-up to the England senior squad last week. He could make his Three Lions debut against Iceland or Denmark this week.

Moreover, Greenwood has a lot to look forward to next season with Manchester United back in the Champions League. He’s yet to play in the competition that we are sure he’ll be ready to announce himself on that stage like he did in the Europa League.

The youngster has credited Solskjaer for helping him develop since becoming manager.

“Ole is a big part of my game,” Greenwood said (via Manchester Evening News). “He’s helped me and got me to where I am now.

“He gave me a chance to prove to everyone what I can do. I’m glad he’s there and he’s a good manager.

“He knows what he’s talking because he’s been a good goalscorer for United. When he’s talking to me I’m always listening and taking his advice.”

Greenwood added that his manager helped transition from youth football to the highest level, saying: “It was from my manager really, from Ole.

“He says to all the young players coming up: ‘Go out there and play with a smile on your face. You play for one of the biggest clubs in the world so just take it on the chin. Go out there and express yourself. Think about it as it’s any other normal game, you’ve been waiting for this moment your entire life so go out and enjoy it.”