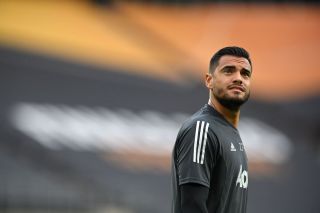 Reports in Argentine suggest Sergio Romero is keen to move to a club where he is ‘respected’.

Olé link the Manchester United goalkeeper with Premier League moves to either Aston Villa or Everton (cited by Sport Witness) while saying Romero wants to join a club where he is truly valued.

Romero’s position in United’s squad changed this summer and he saw it coming, so a lot of this media coverage is probably calculated…

Everyone knew Dean Henderson would return to Old Trafford and fight for his place after the troubling season David de Gea had.

During that period Romero should have been banging down Ole Gunnar Solskjaer’s door demanding to play. Apologise to Romero if he was doing this, but if he wasn’t how can be kick up a fuss about ‘respect’ when he couldn’t demand it then?

The Argentina first choice will fall to third in United’s goalkeeping pecking order if he doesn’t get a move elsewhere.

It’s a bit unfair on him I guess, but Romero hasn’t been offering enough of competition for De Gea when he was in a position to demand more game.