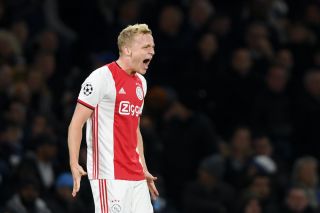 Manchester United have announced on ManUtd.com that the club have completed the signing of talented midfielder Donny van de Beek from Ajax for a reported fee of €39m plus €5m in add-ons, as per Sky Sports.

van de Beek, 23, joins the Reds after his seemingly smooth and faultless transfer rapidly developed over the weekend and into the beginning part of this week.

The 23-year-old who is known for his versatile nature of being able to operate in most roles in the centre of midfield will join up with his new-teams ahead of the new 2020-21 season.

In light of the exciting announcement, the first picture of United’s new Dutch signing wearing the famous red shirt has been revealed.