Manchester United have announced via their official website ManUtd.com that the club have secured the signing of Donny van de Beek from Ajax for a reported fee of €39m plus €5m in add-ons, as per Sky Sports.

United’s securing of van de Beek came as negotiations between both clubs rapidly developed over the weekend and the early part of this week. The transfer of the talented 23-year-old appeared to be seamless which perhaps pays tribute to United and current Ajax CEO Edwin van der Sar’s long-standing relationship.

However, one transfer which hasn’t been as smooth has been United’s number-one target Borussia Dortmund’s Jadon Sancho.

The Reds have been heavily linked with Sancho for the best part of 12-months but talks between clubs have stalled ever since club sporting director Michael Zorc issued a no-nonsense statement claiming Sancho will play for Dortmund next season, as per Sky Sports.

Despite United’s apparent failure to break Dortmund’s stance over Sancho down, the Reds are still favourites to land the talented Englishman.

Elsewhere, United are rumoured to be looking to bring in a centre-back with the likes of AS Monaco’s Benoit Badiashile and RB Leipzeg’s Dayot Upamecano both heavily linked, as per The Mirror and ESPN, respectively.

There have also been multiple reports suggesting that Ole Gunnar Solskjaer will go after Real Madrid left-back Sergio Reguilon who is rumoured to be available for between a modest £17m – £23m, as per Marca.

Although extremely unlikely that United will be able to secure another three top targets, we have put a team together showing who would play where if Ed Woodward and co were able to pull off a transfer window to remember. 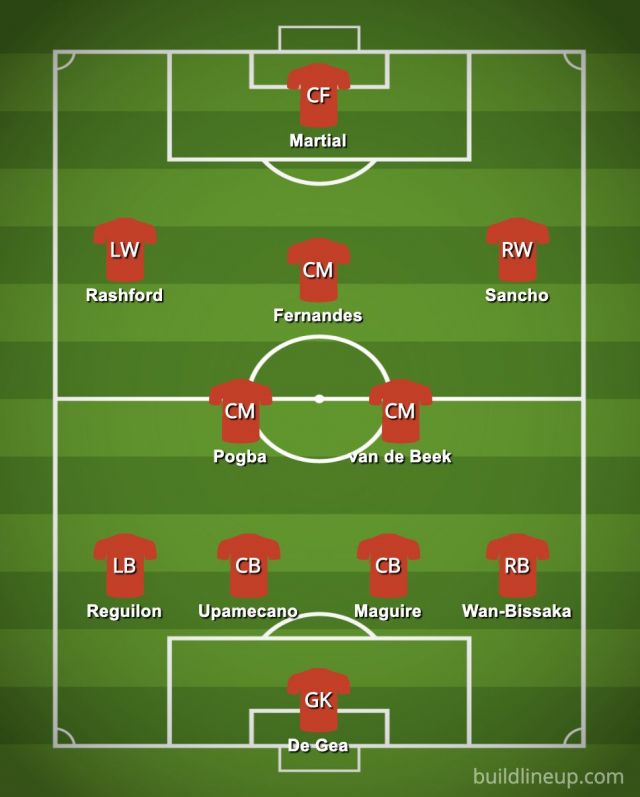 Does this team win domestic and European titles? – Hard to say they wouldn’t.

However, the talent on display here is likely to cost the Reds close to another £200m excluding the £35m recently paid for van de Beek.