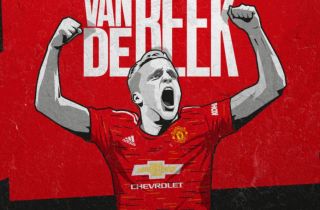 Manchester United have confirmed the signing of Donny van de Beek from Ajax.

Van de Beek has signed a five-year contract, with the option to extend for a further year.

The 23-year-old came through the ranks at Ajax before breaking into the first-team after his debut came in 2015.

Experience in European competition, the midfielder played a key role as Ajax reached the Champions League semi-finals in 2019. He also featured in the 2017 Europa League final against United.

Little did he know three years on he would be joining Manchester United.

Speaking about his transfer to Old Trafford, Van de Beek told the official Manchester United website: “I would like to thank everyone at Ajax. I grew up there and I will always have a special bond with the club.

“I am now ready to take the next step in my career and perform at the highest level and there is no higher standard than Manchester United.

“Everyone has told me how amazing the Old Trafford atmosphere is and I am looking forward to experiencing that, once it is safe for the fans to return.

“This team has some of the best midfielders in the world and I know that I can learn from them and also bring my own strengths to the group.

“Having spoken to the manager about his vision for this team, the direction that the club is going in is hugely exciting and I cannot wait to be part of that.”

Moreover, Ole Gunnar Solskjaer sounds happy with his latest recruit but surely he will demand more signings to give United that extra boost next season. Van de Beek is a shrewd bit of business but there’s a lot needed if we are to catch City and Liverpool anytime soon.

The boss said: “Donny has all of the technical attributes needed to perform in this team and has the personality required to succeed at Manchester United.

“His ability to see pace, time his movements and read the game will really complement the qualities that we have in midfield and his arrival really strengthens the depth of talent we have in that position.

“Donny’s performances in the Eredivisie and in Europe have been excellent over the last few years and we are all looking forward to working with him.”

Solskjaer has an extra option to select from when the team is lacking creativity in the middle, so this is a huge step forward in making United a better team.

Another good signing by the Norwegian.