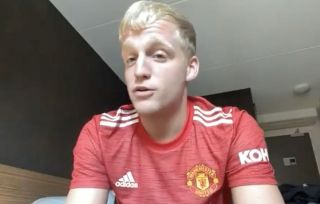 Manchester United’s new signing Donny van de Beek has joined the club after his €39m (Sky Sports) move from Ajax was finalised earlier this evening and announced on the club’s official website ManUtd.com.

van de Beek, 23, has joined United on a five year deal which sees him leave the club he has spent the last 12 years with.

Speaking in his first interview with the club van de Beek has assured fans he will ‘give everything’ for his new club, as per ManUtd.com, van de Beek said: “I hope to see them soon in the stadium when it’s allowed after the coronavirus. I will give everything to the club and I hope we can take titles and a lot of prizes.”

Addressing how he feels about the prospect of linking up with his new team-mates after he finishes his international duties, van de Beek said: “I don’t know anyone from the team so I am really, really looking forward to seeing them, to meet them and to play with them.

“The only one who I know is Timothy [Fosu-Mensah], I was playing with him in the Ajax youth team a long time ago.

“I have talked already with him and he said ‘when are you coming? You’ve waited too long to come!’

“He’s making jokes with me which is nice.”

Despite only playing with Fosu-Mensah at youth level, the talented midfielder is no stranger to United having played against them in the Europa League final in 2017. Speaking about the illustrious competition’s final three years ago, van de Beek said: “Yes we played against you guys and that time it was not the best game from us.

“To be in a final for Ajax was really special, but if you get to a final you want to win.

“I think that game we didn’t deserve to win, United were better that day. We were really disappointed, but this is football and it happens.”

van de Beek will have a chance to win European silverware with his new club next season after the Reds secured a final-day Champions League spot, drawing upon his European experience, van de Beek said: “Yes. I have played a lot in the Champions League and Europa League with Ajax and I take a lot of experience from that.

“If you play in these kinds of games you will improve as a football player.”

However, another competition United will be hoping that van de Beek can contribute to is in the English Premier League, speaking about the size of the challenge and how excited he is to get going, van de Beek said: “Always when people tell you something about the Premier League, they tell you it’s really strong with heavy competition. I will see that.

Read more: Opinion: How Man United would look if three other targets secured