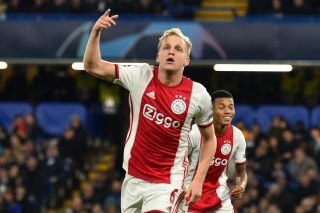 Manchester United announced on official club website ManUtd.com earlier this afternoon that the club have signed exciting midfielder Donny van de Beek from Ajax for a reported fee of €39m plus €5m add-ons, as per Sky Sports.

van de Beek, 23, has been officially announced as a Red Devil in a move which saw him put pen-to-paper and sign a five-year deal with the club, as per Sky Sports.

The latest announcement comes as it has been revealed that the talented and versatile midfielder will wear the number 34 shirt at United.

Nouri collapsed whilst playing for Ajax in the summer of 2017 after suffering a heart-attack, the youngster sadly fell into a coma which resulted in life-changing injuries and ended his professional career.

Speaking about his choice to request the number 34 shirt at his new club, as announced on ManUtd.com, van de Beek said: “This is a special thing for me because my good friend Abdelhak Nouri… maybe you know the story.

“He had a heart attack and he’s a good friend of mine, and I’m really close with his family and his brother is one of my best friends, and I talk a lot with them.

“So I decided to take his old number on my shirt. I want to get good memories with this number.”

It has also been revealed that current United goalkeeper Dean Henderson who prior to van de Beek’s arrival was occupying the number 34 shirt has agreed to let his new team-mate take it.

What a brilliant and touching gesture from everybody at Manchester United.