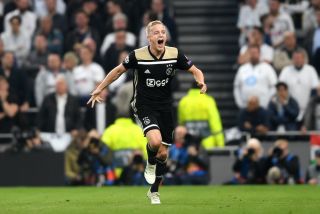 Manchester United have announced via their official club website ManUtd.com that they have finalised the transfer of Donny van de Beek from Ajax for a reported fee of €39m plus €5m in add-ons, as per Sky Sports. In light of the club’s announcement, van de Beek’s agent Sjaak Swart has revealed that the Reds fought off competition for the talented midfielder’s signature from Premier League rivals Arsenal and admitted the Gunner’s lacked the required financial firepower.

van de Beek, 23, has left Ajax after spending 12 years at the club where he made 118 senior domestic appearances and directly contributed to 52 goals.

After the versatile midfielder’s transfer from Ajax to United was announced earlier this afternoon, agent Swart has hailed his client’s transfer as ‘the right choice’ and also revealed that fellow Premier League outfit Arsenal were keen to acquire the 23-year-old but lacked the funds required to seal the deal.

Speaking to Ajax Showtime, Swart said: “Yes, they [Arsenal] really wanted him, but they just couldn’t get the money for a transfer. Even the biggest clubs struggle.

“Arsenal is a great club, but Manchester United will certainly be an interesting adventure.”

Swart’s revelation that United were able to fend off serious competition from domestic rivals will undoubtedly provide the fanbase with much-needed reassure that the club’s hierarchy remain committed in their approach to restore the Reds back to their former glory.