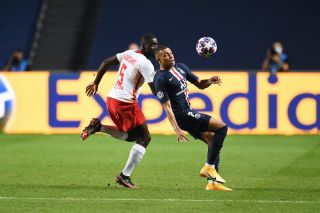 RB Leipzig defender Dayot Upamecano has confirmed he’s held talks with interested clubs, with the prospect of leaving the Bundesliga club this summer.

The French centre-back has been heavily linked with a move to Manchester United following an ESPN report that suggested Ole Gunnar Solskjaer is keen to partner the 21-year-old with Harry Maguire.

That would be an incredible signing after years of poor centre-back buys. I include Victor Lindelof and Eric Bailly in that because neither has worked out like Jose Mourinho, the manager at the time, would have hoped.

Upamecano us one of the hottest prospects in world football and his form this season in the Champions League would have caught an eye as Leipzig reached the semi-finals.

He extended his contract with Leipzig in July but the deal only runs until 2023 — apparently including a release clause in the deal that allows Upamecano to leave for just over £40m, as per The Metro.

‘I extended in Leipzig, because I feel good with my team-mates and my coach. I’m good at Leipzig,’ said Upamecano (via Yahoo Sports).

‘It’s true that I’m in great demand. I speak with clubs, but I’m in no rush and we’ll see what happens in the future.’

Upamecano: "I extended in Leipzig, because I feel good with my team-mates and my coach. I'm good at Leipzig. It's true that I'm in great demand. I speak with clubs, but I'm in no rush. and we'll see what happens in the future." #MUFC

Although he’s happy to reveal that he has been in talks with other clubs, Upamecano states that his focus is on RB Leipzig.

The Metro also suggest that some board members at United think Upamecano would improve more with another season in Germany. That way the club could then activate his release clause…