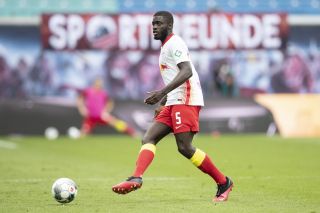 Every day we scan the internet and newspapers for Manchester United stories. When the club get linked with a new player it often creates excitement, but unfortunately this update on Dayot Upamecano is not a promising one.

Upamecano would have been a perfect fit alongside the England international, with a high ceiling to become one of the game’s best defenders.

However, reports in Germany say that is not true and totally play down any likelihood that Upamecano is on his way to Old Trafford.

Ogden has been on the United circuit for years and I find it hard to believe he’d publish his story if it didn’t come from a senior source or two.

Also he merely said that Upamecano has been identified as a target, not that United were in talks do conduct a deal for the Frenchman.

I wouldn’t write off Ogden’s report as fictional but it doesn’t look good if Falk is down playing it already.