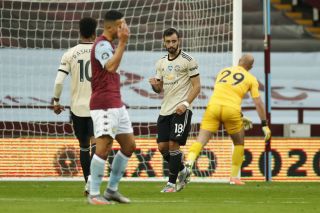 Manchester United midfielder Bruno Fernandes has laughed off some cheeky criticism from Jose Mourinho after the Tottenham boss took a dig at the amount of penalties the Portugal international scores.

Of course, Mourinho wouldn’t dare mention this if he was the one benefiting from Fernandes’ clinical penalties, but it doesn’t take long to see that there is more to game than scoring spot kicks.

Fernandes, 25, had a huge impact on Manchester United’s season after joining the club in January from Sporting Lisbon. The Reds were outside the top-four at the time but they managed to finish third, ending the league season on a 9-game unbeaten run, thanks in no small part of their Portuguese Magnifico.

He scored 12 goals since joining the club, eight of which coming from the penalty spot.

‘Bruno came in, was fit, played very well, improved the United team and also proved to be a great penalty taker, one of the best in the world, because he had about 20 to score,’ said Mourinho.

“Bruno came in, was fit, played very well, improved the United team and also proved to be a great penalty taker, one of the best in the world, because he had about 20 to score.”

Fernandes hasn’t fallen for a war of words with the Spurs manager. Thankfully as that would have been ridiculous — to see him arguing with Premier League managers over interviews (whereas we liked when he told Pep Guardiola to shut up from the pitch last season). Instead he saw the positive side to Mourinho’s dig.

‘I honestly did not feel stung. I felt that I am a good penalty taker and nothing more,’ Fernandes told A Bola (cited via Sport Witness).

‘I understand, but what I take from his words, because I’m a very positive person, is that he said I hit penalties well.

‘It is a reality, not least since I arrived at Manchester United, I have not missed one. And I hope I don’t fail.

‘I’ve only missed two penalties, one for Udinese against Napoli and then in the Portuguese Cup, with Loures.’