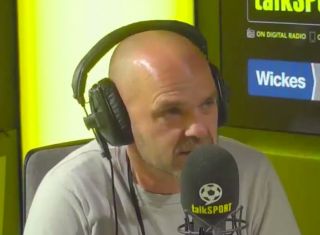 Danny Murphy has bizarrely suggested that the impending arrival of Donny Van de Beek could spell the end for Paul Pogba at Manchester United.

As reported by BBC Sport, United have agreed a £40m fee with Ajax to sign Van de Beek, with a transfer set to be finalised in the coming days.

The versatile Dutch international will add depth and variety to Ole Gunnar Solskjaer’s midfield options with an ability to be proficient in a number of different positions.

Van de Beek can operate in attacking midfield and thrives in a box-to-box role where he can affect play at both ends of the pitch. He also has experience shielding the back four for Ajax and could be utilised in an exciting midfield three alongside Paul Pogba and Bruno Fernandes.

But ex-Liverpool midfielder Murphy believes the imminent signing of Van de Beek means Pogba is likely to leave as he cannot understand why Solskjaer would bring in an additional attacking midfielder otherwise.

However, Pogba is clearly going nowhere this summer after his agent Mino Raiola told Sky Sports that he will begin talks to extend his contract at Old Trafford.

These comments contradict what Murphy said was United’s problem after they crashed out of the Europa League with a semi-final defeat to Sevilla.

“It’s obvious United, for the last few months, have had to play the majority of the same players to push on to get into the top four, which they achieved,” Murphy told TalkSPORT in the aftermath of the defeat, as quoted by the Express.

“They don’t have the strength in depth to be able to rotate and keep players fresh and I thought that showed in the last half hour.”

United’s lack in strength in depth is precisely why Van de Beek is such an astute signing.

Solskjaer can turn to the Dutchman, instead of the likes of Andreas Pereira and Jessie Lingard when he requires quality from the bench.

The Norwegian doesn’t necessarily have to accommodate Pogba, Van de Beek and Bruno Fernandes into the same team, but rotating the side is less likely to hinder performance with the addition of a highly-talented player.

Listen to Murphy’s bizarre claim below, via TalkSPORT:

"Why would you buy an attacking midfielder when you've already got two?"