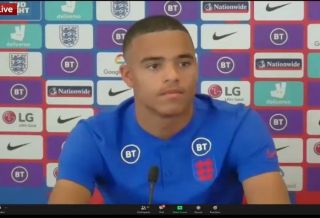 During a press conference ahead of England’s Nations League match against Iceland, Mason Greenwood was asked about Harry Maguire after his Manchester United teammate was found guilty on all charges following an arrest made in Mykonos, Greece.

It’s not a topic many Manchester United players will want to be drawn on. They will all want to focus on returning to football after a short break and ensure the Reds have a successful campaign to reflect on.

Greenwood is only after getting his first call-up to the England senior squad so will be keen on impress. He refused to be drawn on a question about Maguire after his club captain was found guilty on three charges, which was probably the best move.

The 18-year-old supports Maguire in wanting him back in the squad with the centre-back axed from Southgate’s immediate plans after being found guilty in Greek court, as per Independent.ie. His defence team filed for a retrial and Maguire is refusing to apologise because he feels that he did nothing wrong.

Watch Greenwood’s response to a journalist’s question on Maguire below, as per @footballdaily:

The teenage striker said: “It’s really not for me to say, I’m looking forward to seeing him back in the squad.”

🗣 "It's really not for me to say, I'm looking forward to seeing him back in the squad"

United will support Maguire. There’s no two ways about it.