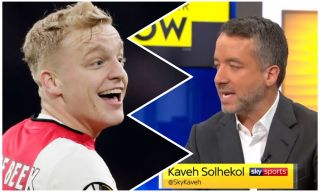 Donny van de Beek’s transfer to Manchester United is hot news this morning so they were discussing it on Sky Sports News.

There has been tons of speculation over United and transfers this summer, but this is one we see being official announced in the next few days.

Respected journalist and United We Stand editor Andy Mitten says the current United players are excited about the prospect of working with the Ajax midfielder.

However, Solhekol says “they [United] are getting an £80m player for half the price” which is similar to what I tweeted yesterday regarding Aston Villa captain Jack Grealish.

🗣"They are getting an £80m player for half the price" @SkyKaveh on Donny van de Beek moving to Manchester United pic.twitter.com/GrDmuq3Lnj

It certainly feels that way and to make it sound like even better business, Van de Beek is an established Netherlands international.

At 23, United are signing a player who could become one of the world’s best midfield players.