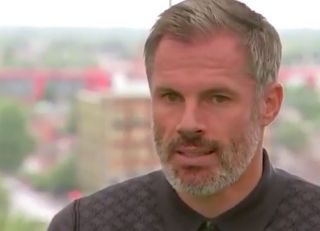 Jamie Carragher expects Manchester United to be much stronger next season due to the impact of playmaker Bruno Fernandes.

The Portuguese midfielder has been a revelation at Old Trafford, scoring eight goals and laying on a further seven assists in 14 matches as he helped the Reds to an unlikely third placed finish in the league.

He has also become a key leader in Ole Gunnar Solskjaer’s side, regularly instructing and demanding more from his teammates.

Carragher told Sky Sports that Fernandes is a ‘super player’ and described his second-half of the season as ‘outstanding’.

Despite Fernandes’ brilliance and the imminent arrival of Ajax midfielder Donny Van de Beek (BBC Sport), Carragher does still not envisage a Premier League title challenge for United next season.

The ex-Liverpool defender expects Manchester City to be his former side’s closest challengers but does think United will reduce the remarkable 33-point gap in points from the defending champions next term.

Listen to Carragher below, via Sky Sports:

🗣"He has been fantastic and with a full season he will make Manchester United a lot better, he's a super player" @Carra23 on Bruno Fernandes' first full season pic.twitter.com/i1oRQGZq43