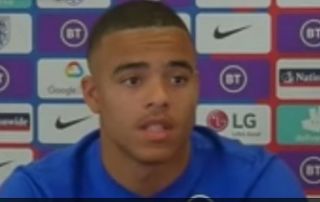 Mason Greenwood has spoken to the press for the first time since his first England call-up last week.

The Manchester United youngster is in line to make his international debut for the Three Lions in their upcoming Nations League fixtures against Iceland and Denmark.

“It’s a dream come through,” Greenwood said when asked about his call-up. He got a phone call from Gareth Southgate while at home with his dad and said he was “over the moon”.

His father, a level-headed man, was “buzzing” with the news, according to Greenwood himself.

Greenwood’s journey thus far has been a remarkable one. From coming through the United academy, being the best player in every age group, to being an established starlet in world football. There’s no stopping this kid and it’s no surprise to anyone that Southgate wants a slice of the cake.

Our concern will always be Greenwood in a United shirt. Playing for England can bring a lot of criticism a young player’s way, as we’ve seen with all too many in the past, so Ole Gunnar Solskjaer will ensure he’s protected by his club.

When asked Lionel Messi potentially joining the Premier League this summer, Greenwood said it would be a dream as long as he’s not playing for Manchester City…

There’s little chance of him coming to United, Mason!

Moreover, Greenwood says Marcus Rashford has been the biggest inspiration in his career. That doesn’t come as a surprise given his work both on and off the pitch.