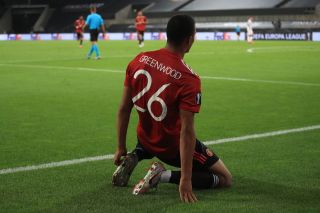 Donny van de Beek is closing in on a £40m move to Manchester United.

The Ajax midfielder is set to join United this week as Ole Gunnar Solskjaer’s first signing of the summer, according to Sky Sports.

You could say he falls into the same bracket as Greenwood and it’s clear how Solskjaer is trying to build his side with young players destined for the very top.

Greenwood will look forward to playing with Van de Beek and vice versa.

United’s teenage striker scored 19 times last season, including 10 goals in the Premier League, which can only be reflected on as an incredible debut campaign. That form saw the 18-year-old get his first England call-up from Gareth Southgate last week.

Greenwood held a press conference ahead of England’s Nations League match against Iceland in the Nations League. He said he was looking forward to the prospect of teaming up with Van de Beek.

“That’s for the club to sort out,” Greenwood said of the transfer (via GOAL), “but I have seen some of his stuff and he looks like a good, promising player, so that’s good.”

I can’t wait to see them pair up at Old Trafford next season. Roll on the big announcement!