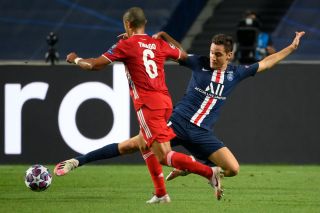 The BILD journalist tweeted: “Update: @Thiago6: @LFC are still in talks with @FCBayern. @ManUtd have not yet submitted an offer @SPORTBILD @altobelli13”

Update @Thiago6: @LFC are still in talks with @FCBayern. @ManUtd have not yet submitted an offer @SPORTBILD @altobelli13

It’s not much of an update as far as Manchester United are concern, but it’s interesting to hear Liverpool are still ion talks with the Bundesliga club over Thiago.

He’s a midfielder who would improve any side but I would be surprised if United signed Thiago as well as Donny van de Beek. Two midfielders when there’s still a centre-back and right-winger needed…

I’m not against the idea of signing Thiago and Van de Beek. We should because it would go a long way towards strengthening the squad, but this is Manchester United owned by the Glazers. We are never going to go into a transfer market and do business like we could.

We’ll keep an eye out for any more updates on Thiago’s future. He’s a player I’d like to see in the Premier League — obviously not at Liverpool or City.