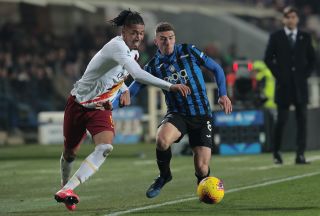 Manchester United expect to receive a new bid from AS Roma for Chris Smalling on a permanent deal.

The Italian side were unable to strike a deal prior to their Europa League round of 16 defeat against Sevilla, so Smalling returned to Manchester United are his loan spell. That was always going to be a temporary solution with the Reds welcome to offers.

But after spending a season with Roma in Serie A it looks like Smalling enjoyed himself and wants to go back. The England international needed a fresh start somewhere and he performed impeccably last term.

Meanwhile at United, Victor Lindelof partnered Harry Maguire but Axel Tuanzebe spent a lot of the season out injured and will see it as a wasted opportunity to get more first team experience at United.

Respected Italian journalist Fabrizio Romano says United expect a new offer and they are working to sign a new centre-back if a ‘good opportunity’ is on the market in the next few weeks.

Manchester United expect to receive a new bid soon from AS Roma to sell Chris Smalling on a permanent deal. Man Utd board are also working to sign a new CB if a ‘good opportunity’ will be on the market on next weeks. 🔴 #MUFC #ManUtd

ESPN suggested that Ole Gunnar Solskjaer was targeting RB Leipzig defender Dayot Upamecano who would be an upgrade on most defenders already at the club. He would be a sublime partner for Maguire but I’ll believe it when I see him holding a United shirt. Until then it’s only mere speculation.