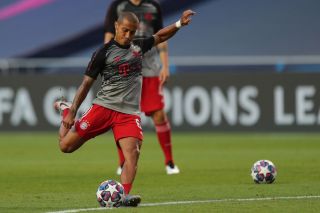 Norwegian journalist Fredrik Filtvedt has dropped a number of stories on Manchester United in the last few days, with fellow Norwegian reporter and Premier League football Jan Aage Fjortoft claiming that he is reliable when it comes to the Red Devils.

We took Jan’s word for it and have run a number of stories from Mr. Filtvedt in recent days. They’ve all mooted the suggestion that Manchester United will enter the race for Bayern Munich midfielder Thiago Alcantara.

Bayern Munich CEO Karl-Heinz Rummenigge has confirmed that the midfielder sees his future away from the club as they expect an offer in the “next few days”.

According to Sport Bild (cited by The Mirror), Manchester United have been monitoring the situation closely with Thiago available for just a €30m fee having recently played a key role in Bayern’s treble-winning season.

Now Mr. Filtvedt says there has been dialogue between United and Thiago, but the player’s wage demands are too high.

The tweet translates to: “The latest news is that there has been dialogue between United and Thiago, but that the Spaniard’s wage demands should be too high.”

Asked about Thiago in an interview, Bayern chief Rummenigge told Welt am Sonntag: “It looks like he will leave us.

“It was important for him that he showed that he can play well in the big games. When it comes to that, it’s a finish that hurts a bit.

“I expect an offer for him in the next few days.”

United’s interest is renewed. Wayne Rooney confirmed he was on their radar previously and warned he did not want him to sign for Liverpool.

“He almost came to United in 2013 and now Liverpool are linked with him,” Rooney wrote in a Sunday Times column. “He’s one of the best midfielders around — I just hope he doesn’t go there!

“He can take the ball, be composed on it, keep things ticking over — and he’ll put his foot in. He’s an all-round midfielder, really, with a bit of everything.

“he backs up that Bayern press and he drops in between the centre haves to take the ball yet can also join in when they’re playing around the other box too.

“He’s a great player. It would be great to see him in the Premier League, actually.”