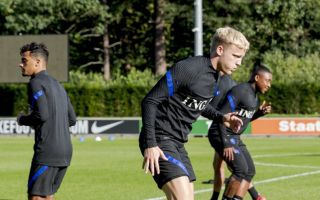 Donny van de Beek was given a temporary leave of absence from Netherlands international duty in order to complete his £40m transfer to Manchester United from Ajax.

Dutch outlet NOS reported on Monday that the Dutch midfielder had been given permission to leave the camp to undergo a United medical in Amsterdam.

The 23-year-old, who was previously thought to be joining Real Madrid, is edging closer to becoming Ole Gunnar Solskjaer’s first signing of the summer, which will see approximately £40m spend on transfer fees (via Sky Sports).

Today he trained with the Netherlands, as pictures below suggest, and this should mean that all the necessary requirements are complete.

There’s a video to go along with the picture of Van de Beek above.

Van de Beek completed his medical yesterday so now it’s down to United and Ajax to make an announcement. Then we’ll have our man.

Our midfield is really beginning to take shape following the January arrival of Bruno Fernandes. Van de Beek will only strengthen it and give us more creative presence in the centre of the pitch.