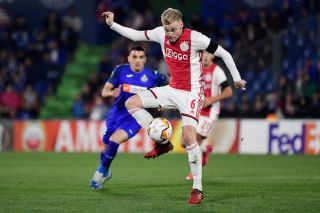 Manchester United fans are eager for the club’s first signing of the summer to be announced.

I don’t blame them because it’s been a difficult start to the summer. There was plenty of excitement about Jadon Sancho joining when the Premier League season finished but all parties have dragged their heels on that one.

United turned their attention towards Van de Beek over the weekend but Stretty News understands the Dutchman was scouted and discussed for months before an official approach was made.

Mitten adds that the current United players are happy with the news Van de Beek is joining the squad and they expect more quality and competition.

Told Donny van de Beek to MUFC will take a few days to finalise, but all still positive. Several MUFC players happy about prospect of him joining too. More quality, more competition.

With the medical supposedly carried out yesterday in the Netherlands, it sounds like they still have some paperwork and obviously bits of PR to get over the line before there’s a proper announcement.

The important point to make is United are making a shrewd signing for one of the games most promising midfielders. Van de Beek was wanted by several top clubs and has chosen Old Trafford.

More healthy competition for the squad.