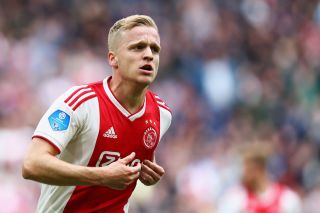 Donny Van de Beek is likely to wear the No 34 jersey at Manchester United next season as a tribute to his former Ajax teammate Abdelhak Nouri, according to reports.

As confirmed by BBC Sport, Van de Beek will seal his move to Old Trafford in the coming days after United agreed a £40m fee with Ajax for the services of the versatile 23-year-old midfielder.

United fans have predictably been guessing which shirt Van de Beek is likely to take for his new side, with Michael Carrick’s old number 16 now vacant.

But according to the Daily Mail, the Dutch international is likely to wear the No 34 shirt to honour his best friend Abdelhak ‘Appie’ Nouri who tragically collapsed on the field during a pre-season friendly in Austria in 2017.

Van de Beek and Nouri were born two weeks apart and progressed through Ajax’s ranks before realising their dreams in the first-team.

Nouri, 20 at the time of his collapse, suffered a cardiac arrest and was left with permanent brain damage.

Earlier this year, Nouri’s family confirmed that he has now left hospital after waking from a coma and is being cared for in the family home.

The Mail’s report notes that Van de Beek stays in regular contact with Nouri’s family and is likely to wear the former shirt number as a tribute to a friend he holds in such high-esteem.