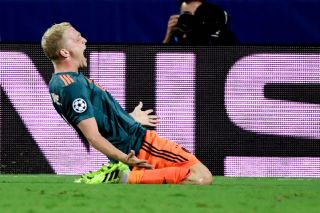 With the news breaking that Donny van de Beek has completed his Manchester United medical this morning, it is expected that the Dutch man will officially become a United player in the coming days.

Of course, Van de Beek has very much been a player in demand since he helped Ajax reach the Champions League semi-finals in 2018/19 and this is a player I am looking forward to seeing in a Red shirt.

However, I wanted to know more about van de Beek; what kind of a player are Manchester United getting? What are van de Beek’s strengths? Thus, I spoke to Dutch football writer Michael Statham of Football Oranje to get the low-down on United’s new signing.

Hi Michael. Thanks for taking the time to speak to me today. Firstly, what can you tell us about van de Beek’s rise up to this point?

Hi Jimmy. Donny van de Beek came through Ajax’s famed academy. During his late teenage years, he was developed by Jong Ajax (Ajax’s reserve side playing in the Dutch second tier). With Jong Ajax, Van de Beek was able to play lots of games against other senior players. He began as a defensive midfielder in this side; however, as he began to break through with Ajax’s first team, he played more games as a box-to-box midfielder, and finally as a ’10’, where he could link midfield with attack and score plenty of goals in and around the box. After four years of regular football with Ajax, including an Eredivisie title and many sterling performances in the Champions League, it’s time for van de Beek to take that next step abroad.

What kind of a player can United fans expect to see should this deal go through?

As I mentioned, he developed from a defensive midfielder into a more attacking one. He is smart – particularly off the ball – with quick, technical feet around the penalty area that help create opportunities in tight spaces for himself or a teammate. He makes late runs into the box and is a passionate, hard-working young man.

Could you see VDB play in the same midfield as Pogba and Bruno?

He may well play in a midfield with Pogba and Fernandes. I must note though that Van de Beek is versatile in his ability to play as an ‘8’ or a ’10’. I am certain he won’t play as a defensive midfielder for United, as that was only used by Ajax in more recent years when they were against a much weaker opponent and Van de Beek’s passing and technical abilities were more useful from this deeper role when breaking down opponents. He will rotate with Pogba and Fernandes in what will be a long season ahead, inevitably full of injuries and tactical changes.

I don’t think there’s anyone quite so technical and clever who can link the play together like Donny! Arguably he shares some resemblance to Jesse Lingard in his style of play, but I’m sure United supporters will be glad to have a different option now in their midfield who will work hard to prove himself in England.

Can you see him fitting into United’s first XI immediately or is he more viewed as a rotation/cover option?

That depends on how quickly Solskjaer wants to throw him in! The Premier League is a little different to the Dutch Eredivisie in that respect; players seem to need more time to settle in England. Donny van de Beek is fit and firing for another new season, and since he is heading into his peak years as a midfielder, he won’t wish to be a cover option. I see him being heavily rotated with United’s other midfield options throughout a long season with many double-game weeks. Something noteworthy is how much of a big game player van de Beek is: he loves the big occasion and I can see him playing a key role in tight games next season; he reminds me of how Sir Alex Ferguson would wheel out Ji-Sung Park to play all the big games! Van de Beek is a cracking player and will offer something different to Manchester United.

Read more: (Video) Man United are getting an £80m player for half price, claims Kavah Solhekol