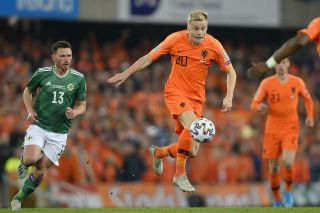 It’s been a frustrating start to the summer for Manchester United.

In an ideal world, the club would have made at least one signing by now.

After finishing third in the Premier League and reaching the Europa League and FA Cup semi-finals, fans wanted to see the board back Ole Gunnar Solskjaer in the transfer market to ensure progression continued.

The difference Bruno Fernandes made after his January arrival is proof in the pudding that the Reds have been lacking star quality for years. Sadly one signing isn’t enough to make a real difference.

However, Stretty News understands United are closing in on a deal for Donny van de Beek, which has been reported by most outlets at this stage, including the BBC.

The Ajax star could complete a £40m move to Old Trafford as the Reds close in on their first signing of the summer.

According to Adam Crafton of The Athletic, this is a move that could see United move one step closer to competing with rivals Manchester City.

The Blues finished 15 points ahead of United last season and we’ve got a lot of work to do in order to bridge that gap. But it needs to be our objective as well as ensuring Liverpool don’t win the league again.

Crafton tweeted the following last night: “Can’t understand why people wondering whether #mufc ‘need’ Van De Beek. City have Mahrez, Foden, Bernardo, Jesus on bench some games. That’s what they have to match. Anyway, deal not completed but edging there tonight.”

Can’t understand why people wondering whether #mufc ‘need’ Van De Beek. City have Mahrez, Foden, Bernardo, Jesus on bench some games. That’s what they have to match. Anyway, deal not completed but edging there tonight. https://t.co/Vhfrs3Sw30

At 23-years-old, United are signing a young Dutch midfielder with ability in abundance, who has been developing into a genuine world class talent. It’s exactly the sort of player we should be trying to sign for the money that’s been reported.

More creativity presence in midfield can only be a good thing.