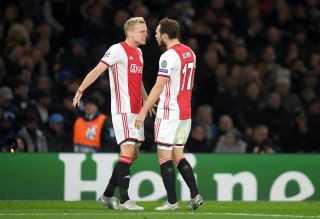 The Dutchman has agreed personal terms with Manchester United, as per Sky Sports, and will complete a medical in the coming days ahead of a £40m move from Ajax.

Van de Beek has been on the list for a number of top clubs for two years since Ajax reached the Champions League semi-finals. That was the last great Ajax side and a number of its best players have since moved on. The 23-year-old is one of those who stayed on and continued to show his great form, but his time at the Johan Cruyff Arena is about to come to an end.

He can dribble, pass and create and it looks like he’s got an eye for drawing a foul. A player of his mould and ability will compliment Paul Pogba and Bruno Fernandes brilliantly because teams will have to try a lot harder to keep us out of their box.

This deal is probably what Jack Grealish feared worst but it’s a shrewd bit of business because we got a better player for less than what Aston Villa would demand for their playmaker.

Check out some of Van de Beek’s best bits below – check out his quick feet and driving runs into the box: