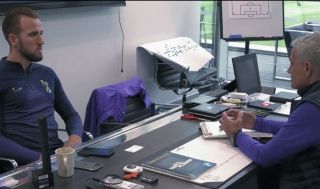 Amazon Prime released their latest fly-on-the-wall documentary earlier today. The eagerly anticipated documentary follows Tottenham Hotspur and their players through the 2019-20 season. The very first episode features a stunning conversation between new boss Jose Mourinho and star-striker Harry Kane where Mourinho claims the current Spurs squad is better than the one he had when he was manager of Manchester United.

Mourinho was named as the new manager of Spurs in November 2019 after Mauricio Pochettino was sacked by chairman Daniel Levy.

In the very first episode of Amazon’s ‘All or Nothing’ documentary there is a conversation between Mourinho and star-striker Kane which is centered around the Englishman wanting to reach the heights of Cristiano Ronaldo and Lionel Messi.

Mourinho goes onto assure Kane that with his help, he can get him there and in an attempt to convince Kane that he has taken the Spurs job for the right reasons, Mourinho tells him that the players at Spurs are better than the players he coached at United.