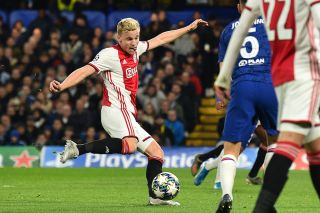 Van de Beek had also been linked to La Liga duo Barcelona and Real Madrid, but the 23-year-old appears set for the Premier League in a deal that will see him join the Reds.

“And Manchester United really need this kind of player in their team. This transfer is fantastic for us [Dutch people] too. We are all going to follow him now. This move is so deserved.”

As an academy product, Van de Beek has spent five seasons in Ajax’s first team, making close to 200 appearances for the Amsterdam outfit.

He scored eight Eredivisie goals and registered five assists last season, while he scored 10 goals across all competitions. That’s a lot of goals from midfield and it will be a welcome addition at Old Trafford.

After being left out of Ajax’s squad over the weekend for a pre-season friendly against Frankfurt, Erik ten Hag confirmed Van de Beek’s future at the club was up in the air and perhaps the main reason behind his omission.

“The fact that Donny did not play does indicate a direction,” he said (via the Metro). “The request not to let him play did not come specifically from one side. We do that together.

“Agreements have been made about a possible transfer, and if that possibility arises, you must also co-operate.”