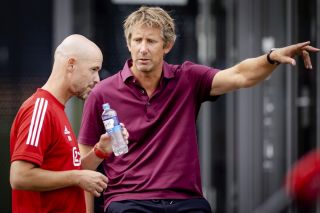 Football journalists all over Europe would have been busy networking these past 48 hours to see of any of their contacts have information on Donny van de Beek’s future. News emerged on Sunday that Manchester United had made an approach to sign him, leaving Ajax manager with no other choice but to leave him out of a pre-season friendly, and now club CEO and former United goalkeeper Edwin van der Sar has all but confirmed the transfer.

Van der Sar gave a response that I can only presume would leave most news hungry journos drooling at the mouth this evening, after ex-teammate Rio Ferdinand tweeted: “Good Evening @Donny_beek6“.

It’s a transfer we are confident will be announced this week, especially now that Van der Sar has dropped a hint that Ajax will lose another one of their best players this summer.

Van der Sar, a legend at United like he at Ajax, will be happy to see Van de Beek move on to one of Europe’s biggest clubs. Now is the time for the 23-year-old Netherlands international to reach higher.

But right now it’s clearly a blow to be losing such a key player.

Van der Sar left a crying face emoji in reply to Rio, but he can assure the ex-United keeper that Van de Beek is in safe hands.

We’ll have more updates on Van de Beek when we have them.