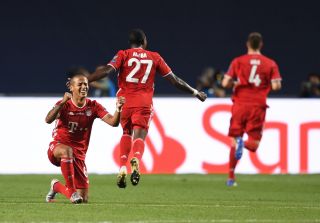 Liverpool have been heavily linked with a move for Bayern Munich midfielder Thiago Alcantara.

It is a name that will be familiar among Manchester United fans because David Moyes tried to sign him in 2013 before pulling the plug on any deal. He would go on to follow Pep Guardiola from Barcelona to Bayern Munich, where this season he won the treble.

Perhaps it’s time for something new. Thiago is 29 and still one of the best midfielders in world football. He would improve last season’s Premier League champions but he would also help United bridge the gap from third place to first, and that needs to be the ultimate aim this summer.

Norwegian journalist Fredik Filtvedt previously claimed that Manchester United were interested in the Spain international, as well as doing a deal to bring Ajax star Donny van de Beek to Old Trafford. Now he has added some information to suggest Liverpool need to sell players before they buy players.

There is no easy fix for that and I can’t imagine Jurgen Klopp being too happy after missing out on Timo Werner already in the summer transfer window.

The tweet when translated to English: “Liverpool’s financial situation apparently means that they have to sell before they can buy (Thiago). United come late to the party here, but in that sense it is possible to coup Thiago.“

That’s not good news for Liverpool and you’d like to think United are ready to take advantage of the situation.

But will they sign Van de Beek and Thiago? That would be a push.