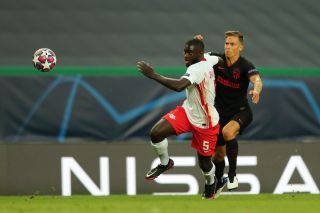 Ole Gunnar Solskjaer needs a centre-back signing this summer and RB Leipzig defender Dayot Upamecano is a target, according to ESPN.

It looks like Ajax star Donny van de Beek will be the club’s first major signing of the summer and he is expected to complete a £40m move to Old Trafford this week (via BBC), but attention will quickly turn on other deals that United need to get over the line before the transfer deadline on October 5.

United’s Premier League opener against Crystal Palace takes place on September 19, so Ed Woodward and Matt Judge will be expected to negotiate quickly to give Solskjaer the best chance possible next term.

ESPN claims Solskjaer is now prioritising the addition of a top-quality centre-back to play alongside captain Harry Maguire.

The 21-year-old performed brilliantly during Leipzig’s run to the Champions League semi-finals.

Eric Bailly’s fitness can’t be trusted and Victor Lindelof isn’t good enough to be starting every week for United. Solskjaer must come to that reality now and sign a top centre-back. I can’t see United doing anything worthwhile until a top defender is secured to play alongside Maguire.