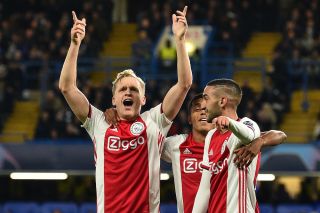 Manchester United look set to sign Ajax midfielder Donny van de Beek so we’ve been checking the archives to see what people have said about the Netherlands international.

Chelsea legend Jesper Gronkjaer previously talked up Van de Beek and compared him to no other than Frank Lampard.

“I wouldn’t be surprised to see him at Real Madrid or Barcelona but I would rather see him at a club just below that,” Gronkjaer told GOAL earlier this summer.

“For his style of play alone, clubs like Tottenham or Chelsea would be a better fit.

“They are still top clubs and he is more like Frank Lampard, that kind of player.

“He is a big guy, box-to-box and takes good long shots, but he is not as technically gifted as other players that have come from Ajax. He is a player you can always get a certain level from.”

That’s high praise from the former Chelsea player but the Blues seem well-stocked in that department, though the likes of Ross Barkley doesn’t belong in the same sentence as Van de Beek.

The Dutch 23-year-old has also been heavily linked with moves to La Liga duo Barcelona and Real Madrid, as per Marca. They’ve obviously seen something in him yet he’s about to move to Old Trafford and it’s hard not to get excited.

I don’t think we’ll see a midfield trio of Bruno Fernandes, Paul Pogba and Van de Beek unless we’re going all out to chase a game, but it’s an intriguing prospect at the same time.

The best young players belong at Old Trafford. It looks like another one is on his way.