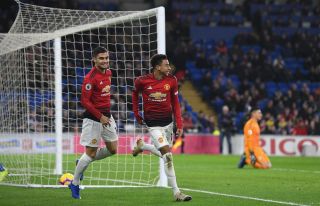 van de Beek, 23, is set to have his £40m transfer from Ajax finalised after he completed his medical in Holland earlier this evening, as per The Sun.

According to The Times, the Reds could be set to offload midfield duo Lingard and Pereira in order to make room for 23-year-old van de Beek.

The report also claims that manager Ole Gunnar Solskjaer is keen to extend his spending as he looks to also sign a centre-back, a right winger and a striker before the transfer window slams shut in October.

With the Reds seemingly spoilt for choice in midfield with the likes of Paul Pogba, Scott McTominay, Fred, Bruno Fernandes, Nemanja Matic and van de Beek when he is officially announced, the two most likeliest to make way are Lingard and Pereira.

The pair have found their first-team game time severely reduced since June which looks set to worsen after news that van de Beek had agreed a £40m move to Old Trafford broke last night, as per Sky Sports.