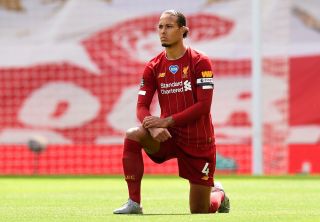 United have moved close to a deal with Ajax over their star midfielder, with a deal hopefully completed this week.

Van de Beek has been one of Ajax’s standout players over the past two years and has attracted interest from some of Europe’s biggest clubs.

But the Reds look set to win the race for the 23-year-old Netherlands international, who is likely to be Ole Gunnar Solskjaer’s first signing of the summer.

Asked if he is trying to change Van de Beek’s mind about joining Liverpool’s rivals, United, Van Dijk replied (via the Metro): ‘No. I wish Donny all the best.

‘It’s fantastic for him and great for Dutch football.

‘It’s another great step to another beautiful club for a Dutch player.

‘The same goes for Nathan Ake.’

Next season they will be rivals and on international duty I’m sure there will be plenty of banter.

Liverpool might be ahead now but United can make ground on their rivals if they spend well this summer. Acquiring a midfield talent like Van de Beek is clearly a step in the right direction.

Solskjaer will have a number of options to select from in midfield next season and United try to bridge the gap between them and the Scousers.

There’s a lot of work to be done on that front.