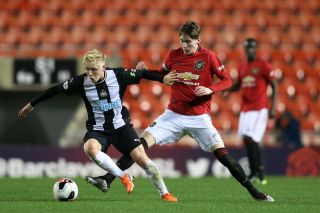 Manchester United’s James Garner is edging closer to securing his first loan move as he continues his development in the hope of becoming a first-team United player in the near future.

The young midfielder has made his way through United’s youth ranks and made his competitive first-team debut all the way back in February 2019 after being introduced as a 90th minute substitution in the Red’s 3-1 away win against Roy Hodgson’s Crystal Palace.

Despite Garner’s impressive potential, inevitably the likes of Scott McTominay, Fred, Paul Pogba and soon-to-be Donny van de Beek all sit way ahead of him in the pecking order.

United’s flourishing depth in midfield means that Garner will need to spend next season on loan as he attempts to further his development and come back to Old Trafford ready to hopefully push for a place in the starting team.

Stretty News revealed the list of potential loan destinations for Garner last week with the likes of Coventry and Blackburn leading the race to acquire the youngster.

However, in a recent development, we have been advised from a close source that whilst those two sides remain in the hunt for the talented 19-year-old, fellow Championship side Huddersfield Town have emerged as late favourites to land the English midfielder.

We understand that both Coventry City and Blackburn remain interested but will need to offload first in order to bring new talent in, this is also the situation for Bournemouth who expressed an interest in Garner’s services too.

In addition to the above, we understand that Neil Lennon’s Celtic were seriously considering taking Garner on loan next season but their failure to act quickly enough has paved the way for Huddersfield to snap United’s young midfielder up.