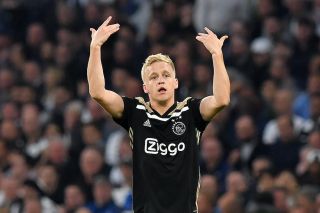 Ajax midfielder Donny van de Beek continues to edge closer to being announced as an official Manchester United player after he has reportedly completed his medical whilst in Holland.

van de Beek, 23, has been a long standing target for a host of top European sides including the likes of Real Madrid who he also joined back in 2019 before opting against signing the contract, as per AD.

However, it is to be Ole Gunnar Solskjaer who has won the race for the highly-rated versatile midfielder after his £40m transfer was agreed last night, as per BBC Sport.

According to Sky Sports News, should United get the deal over the line and finalised by Friday, van de Beek will be able to apply for a medical exemption on sporting grounds and will be able to avoid self-isolating for two weeks.

Donny van de Beek can avoid having to quarantine in the UK if he joins Manchester United before Friday 🤝pic.twitter.com/EvnRyKrElm

As this story continues to develop very quickly, the latest comes from The Sun who claim that the 23-year-old has already completed his medical in Holland and will soon be announced formally as a United player.

The Sun also claim that van de Beek will be unable to wear his famous number six shirt as new team-mate Paul Pogba is expected to remain at Old Trafford and will keep the jeresey he currently occupies.