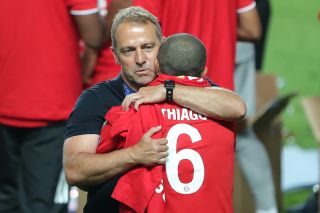 Thiago, 29, is one of the best midfielders in the world on his day and he’s good enough to improve any side in the Premier League.

He played a key role in a massively successful campaign for Bayern — winning the Bundesliga, the DFB-Pokal and the Champions League.

The Spain international has incredible technical ability and possesses enough quality to win games. After being linked with Manchester United in the past, Thiago left Barcelona for the Bundesliga giants in 2013.

The La Masia product was a player Pep Guardiola was keen to bring to Bavaria.

Thiago is rumoured to be available this summer for £27m, which sounds like fantastic value, as reported by The Guardian.

Still, it sounds like Liverpool are struggling to meet Bayern’s demands.

That gives United a chance to swoop in and sign a truly wonderful footballer.

According to a report in Welt am Sonntag, Bayern Munich are expecting an approach for Thiago in the coming days, and talkSPORT are quick to link United in their story. Club chairman Karl-Heinz Rummenigge said: “We are expecting an offer from another club in the next few days.

“He told us that at the end of his career, he would like to try something new.”

In other news, Abend Zeitung have reported this week that a move to Merseyside will happen.